This morning I ran the Friends of Mt. Tabor "Tar 'n' Trail" 10k up at Mt. Tabor as part of my ongoing quest to participate in some sort of sanctioned running event each month of this year. I was fortunate to find this one in what was basically my backyard at Mt. Tabor. On Tuesday I'm leaving for a fun, family-filled adventure through the Balkans and this was pretty much my last shot!

In fact, as part of my plan to try and sleep on the plane rides and acclimate to the new timezones as quickly as possible, I decided to make a point of completely tuckering myself out this weekend with the hopes it might carry-over through the first part of the week. It started with hot yoga on Friday, a poorly-thought-out, 17-mile (!) run down the Spring Water Corridor yesterday — and likely one of our last truly-hot days of the year here in Portland — and the aforementioned 10k this morning followed by a long sauna session and a massage at Löly. It's not quite the sentō or eggy, geothermal waters of Iceland but its does in a pinch.

My body feels like jelly. It's a quarter after 9pm and I was quite close to shutting it all down and going to bed, but I want to get in the habit of writing daily entries again. I'll be making my way through Hungary, Serbia, Bosnia and Croatia soon and I want to jump on the opportunity to document things the way I'd wanted to all of 2013 when I was traveling.

But back to more provincial matters: The Mt. Tabor 10k. It went well and was utterly lovely, as most runs tend to be and Mt. Tabor generally is. I've participated in a fair number of races this year but a few things made this one stand out:

Normally there isn't a whole lot of thinking involved when I run these things. You follow the arrows, the people in front of you (There are people in front of you? YOU ARE RUNNING TOO SLOW.) and generally have helpful volunteers around to point you in the right direction. This race had all those things but with an added twist: there were three, color-coded paths that looped and criss-crossed across the park. Here's a copy of the map they were handing out at the beginning of the race from their website: 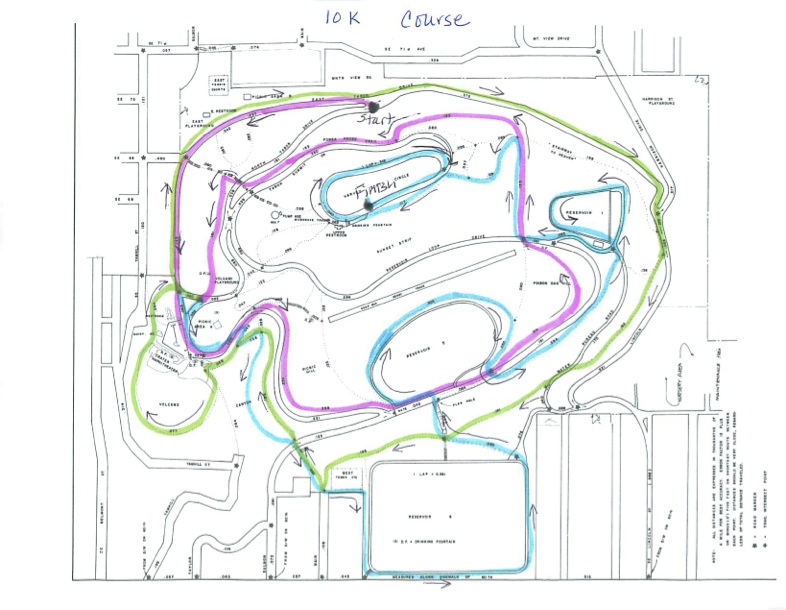 Seriously. Stare at that for a moment. Now pretend it's 7:00am and you'd just rolled out of bed a half-hour before, slammed a smoothie and ran up to the registration area to get handed that.

The order you took these in was slightly different depending on whether or not you were participating in the 5k or the 10k. In the later case there was an extra green trail to run between the red and blue trails, all of which confusing crossed-paths at different points and in a couple cases looped back on themselves. Half the trails were paved, which generally had better signs and made knowing where to head easier, and the other half was on dirt and gravel paths between the trees and reservoirs. These were generally less well-marked and not always obvious. Early-on the man who'd eventually come in 2nd overall took the wrong turn and I and a nearby runner had to yell to get his attention and point out the mistake. Later in the race I was holding on to 2nd but took a wrong turn on the green path leading to a dead-end. Three other people had followed me and we had to scramble to get back on course!

All in all it was way more thinking during a run than I was accustomed to. My sense was the race itself was measured and planned quite well but it could've benefited from some more, excruciatingly obvious indicator of where the paths were, though I recognize there's only so much they can do. It was kind of a fun in a way, making the whole thing feel a little bit like a maze or obstacle course in addition to a race. I recognize serious, racing purists would probably hate this.

The last piece from this race that really stood out what a cruel, cruel joke it was to stick the super-steep staircase that exists between the reservoirs on the final leg of the race towards the end. Those familiar with the park will likely immediately know the stairs I'm talking about (Amusingly I Googled "Mt. Tabor Stairs" and found this video which is not the staircase I'm talking about. Those would've still been preferable and plenty challenging on their own.) about but for those who are not check out this page:

It's even notable enough to get a small mention on the Mt. Tabor Wikipedia page. Though it's only 91 stairs compared to the 282 found on the staircase on the other side of the park this one fills me with more dread. There's a total elevation gain of about 636' in the park but this staircase feels like knock out at least 120 of them (I have no idea how many feet it actually elevates... but I'd be curious to know!) in a very short distance. In short: cruel and unusual, especially when you're on the last leg!

Despite all the challenges I finished, as is always my goal. I managed to even come first in my age group and 4th overall (I think) which genuinely surprised me! Continuing to realize I'm not so slow as I feel. I look forward to doing it again next year.