I recently got invited to play with DALL-E 2. In case you're not familiar, it's a neural network form OpenAI that renders images from text. It's kind of magical, at times. More often than not it feels like playing with an interactive fever dream.

I've actually tried to play with it and ponder good the product I work on at Axios. More often than not though, I end up exploring the the boundaries of the inane and fantastical. I can't help myself.

Somewhere at the intersection of work & play I thought of a great use for DALL-E—new "elmo fire" memes! It's actually called Elmo Rise (Honestly did not know that until I just looked it up) and I use it probably more often than I should on Slack.

Pushing big changes to production? Everything collapsing on Friday afternoon in mysterious ways?

All great opportunities for Elmo Rise!

It's one of my favorites and I use it more than I probably should as an engineering manager.

So I decided to ask DALL-E to create some new "Elmo Fire" memes.

It did not disappoint. 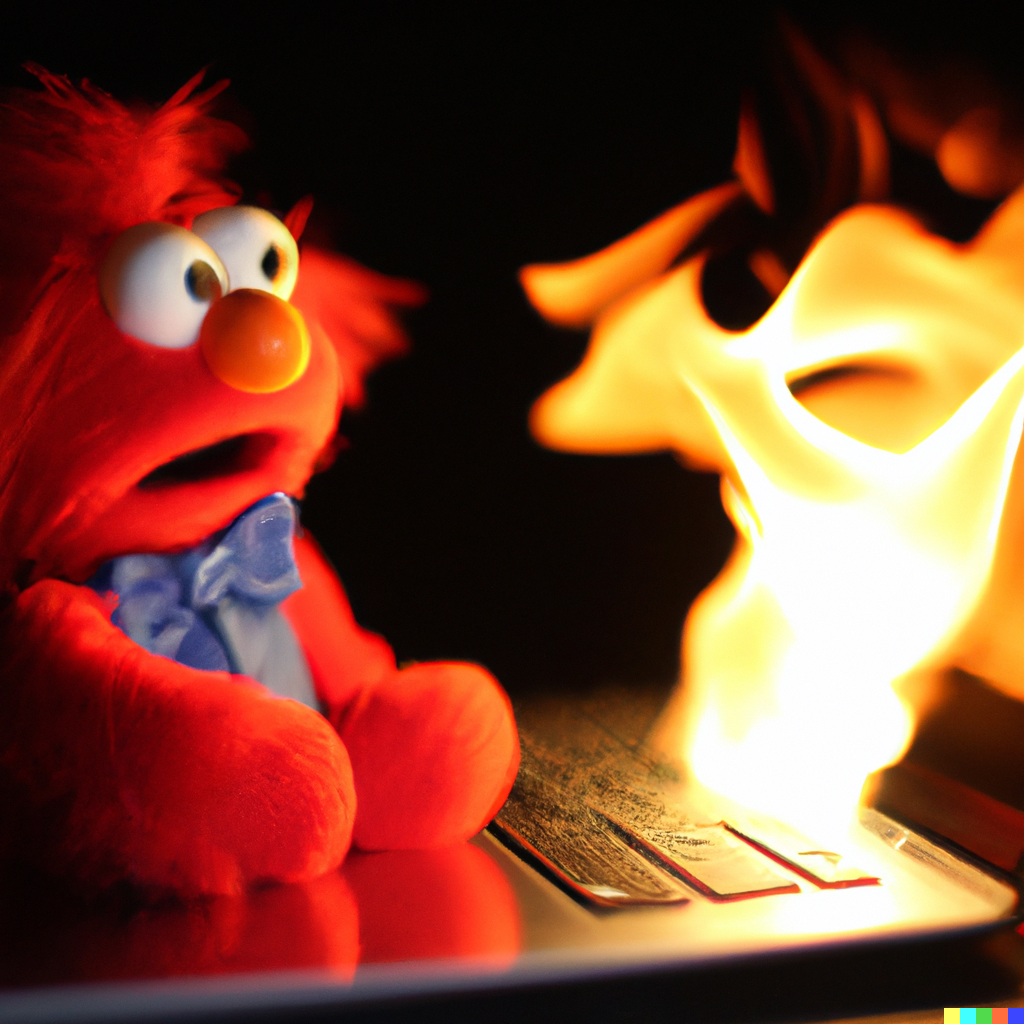 This one quickly emerged as my favorite. The expression on his face, the tussled hair, the inexplicable bowtie... it's too good. Tempted to make this my new profile picture.

Here’s “proof” via a public link to this image on OpenAI’s site: 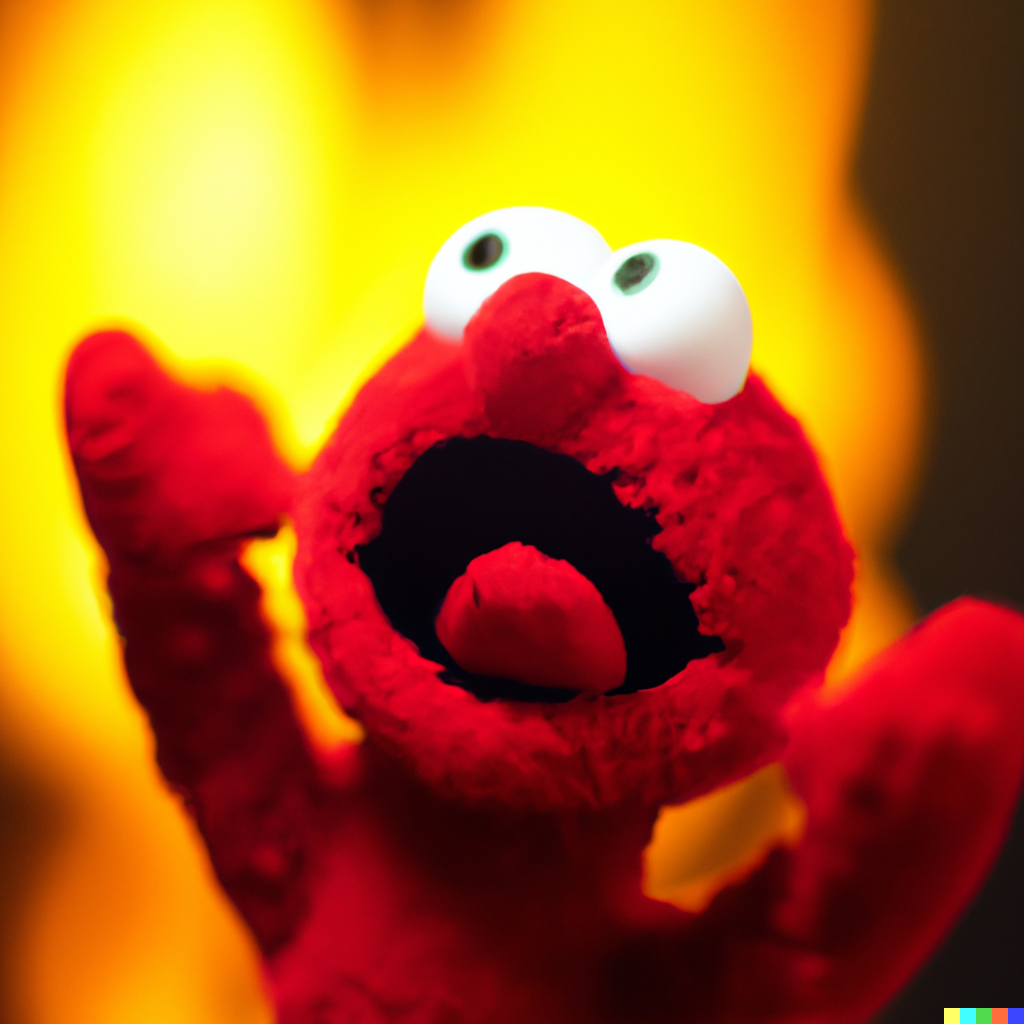 This one was also quite good. I'll confess, I've never thought much about what Elmo's tongue would look like. I appreciate that DALL-E did though. 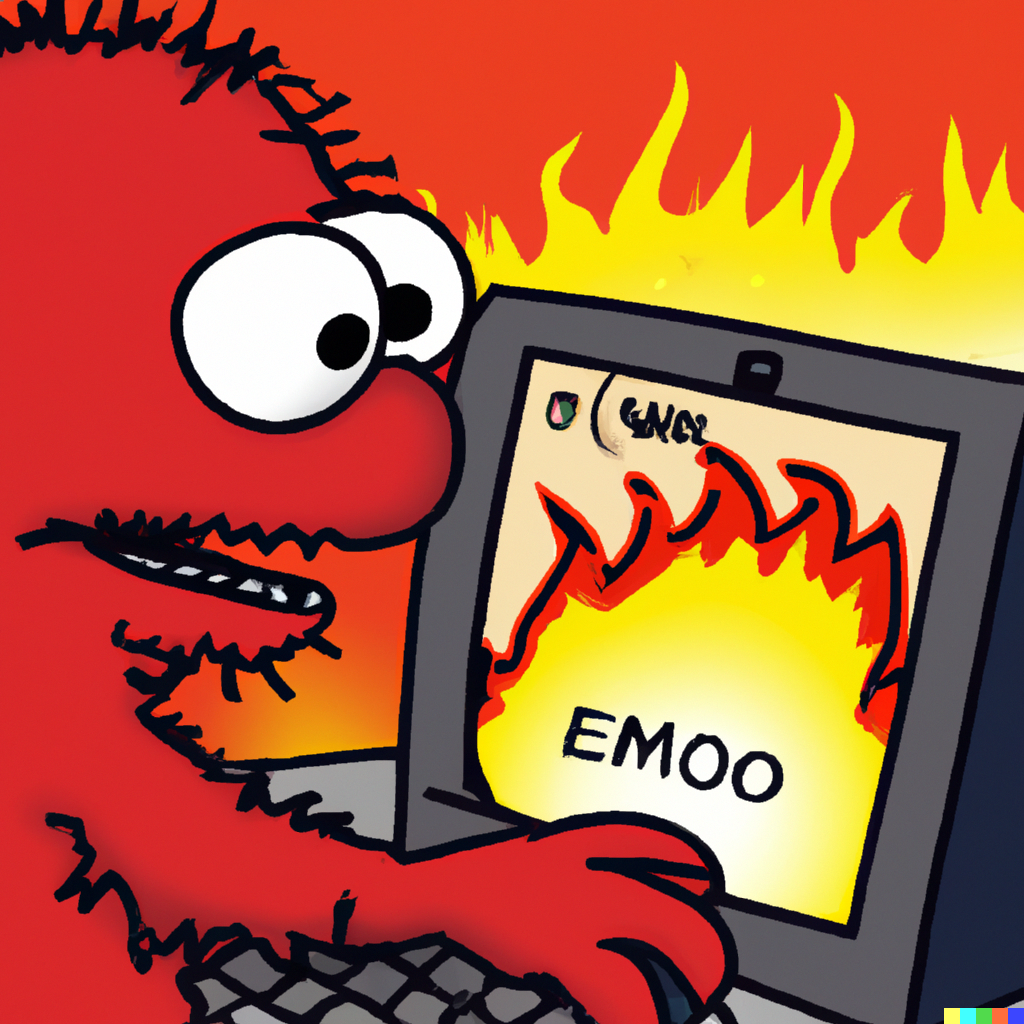 This one had a very different style! DALL-E is not particularly good with text and it was funny to see the take on Elmo's name appear on the screen. As our product is also an email product, I found this one useful since it almost sounds like "Email" as perhaps pronounced by a toddler.

Not sure where Elmo's nose went though. 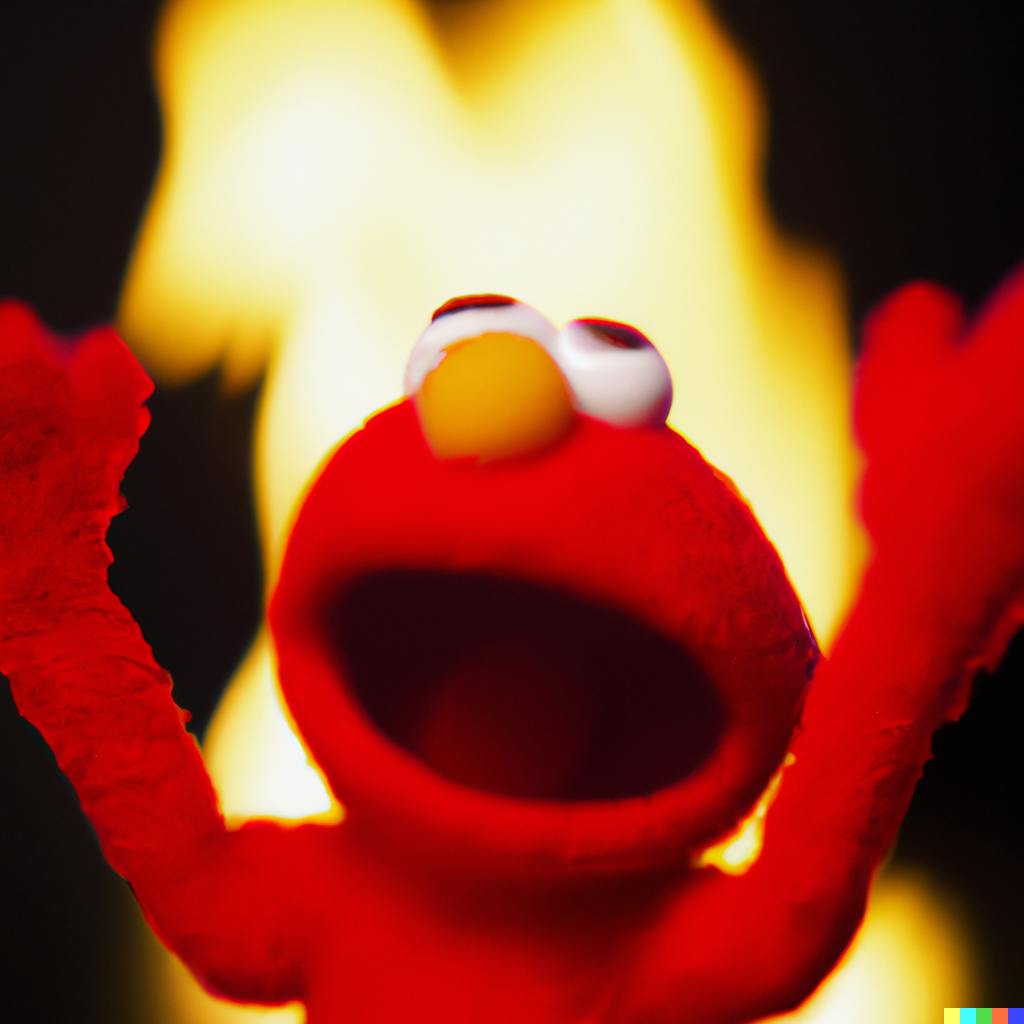 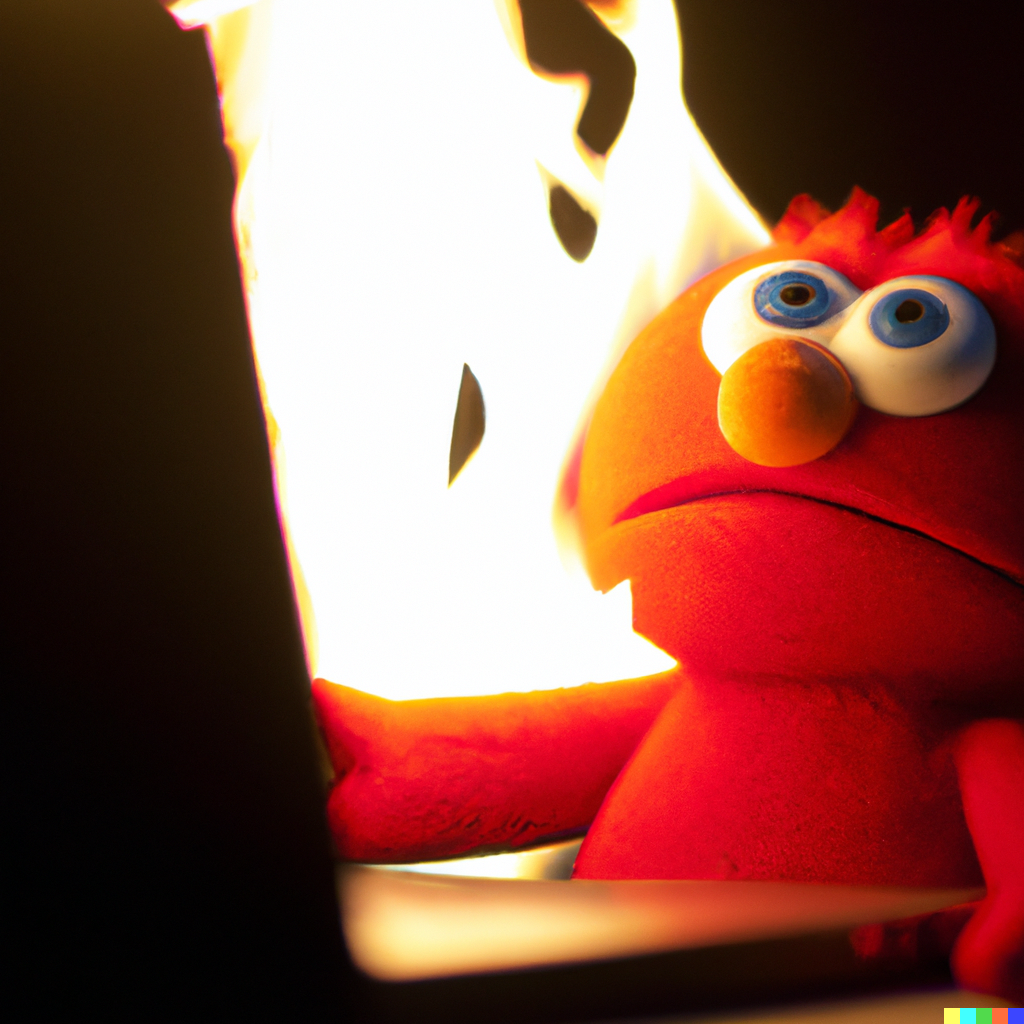 Another quality entry for work. Somewhere between the original Elmo meme and the "This is fine" dog. 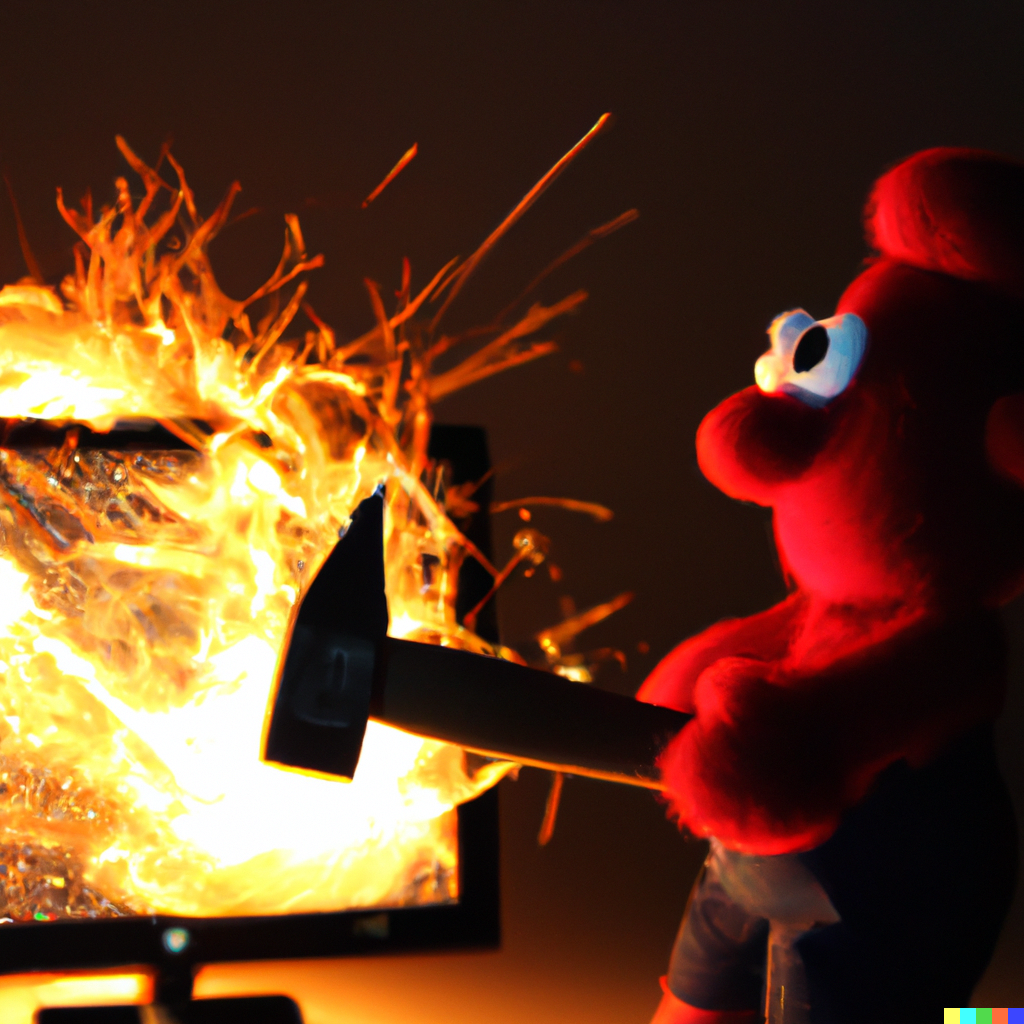 I went a different direction here, wondering if I could get Elmo smashing a computer with a hammer. I've joked that hitting the code with a sledgehammer is basically my programming style and thought it might be nice to have an accompanying image. This is definitely not Elmo though. Maybe a cousin? 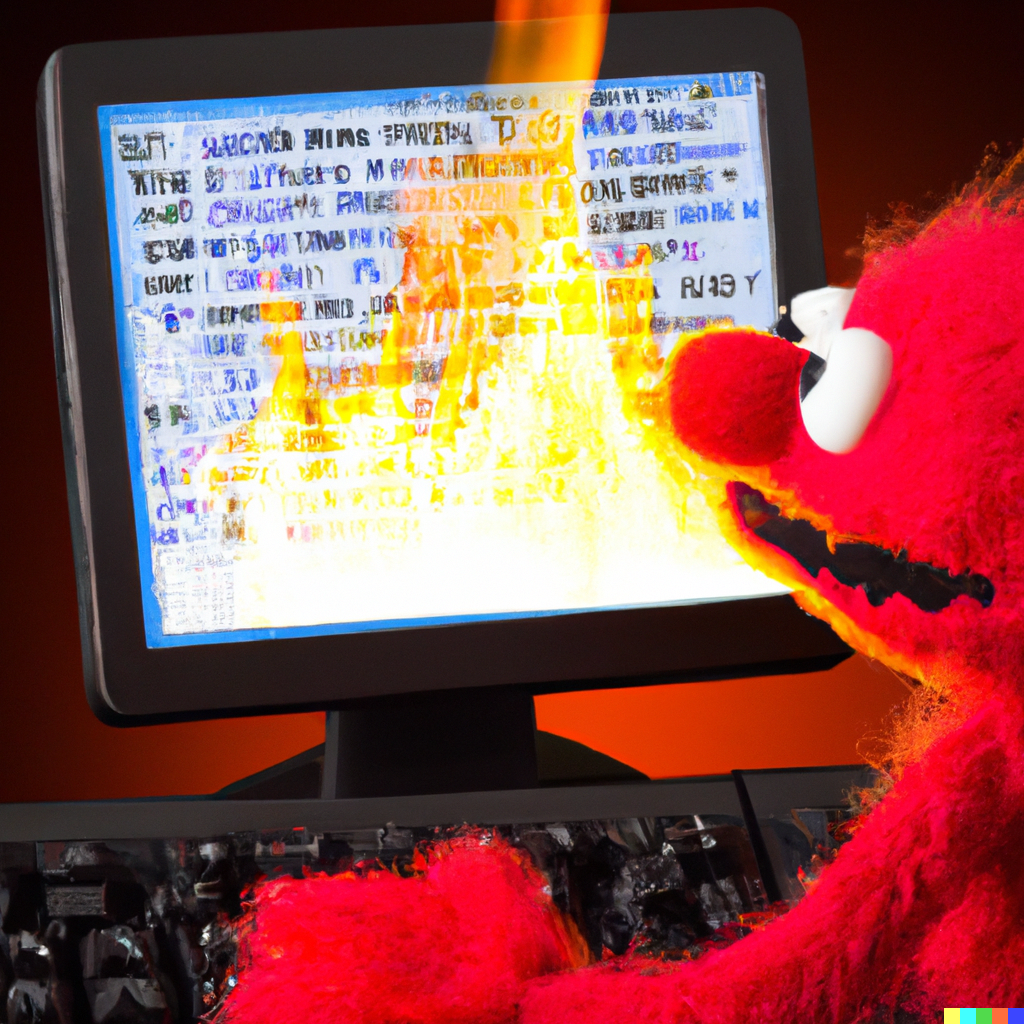 A little bit nightmarish and and surreal. A lot of DALL-E images end up like this—they look sharp enough at 100x100 pixels and your brain fills in the gaps and/or ignores the blurry bits. When you zoom in closer you start to notice the abstract, almost painterly quality to the image. 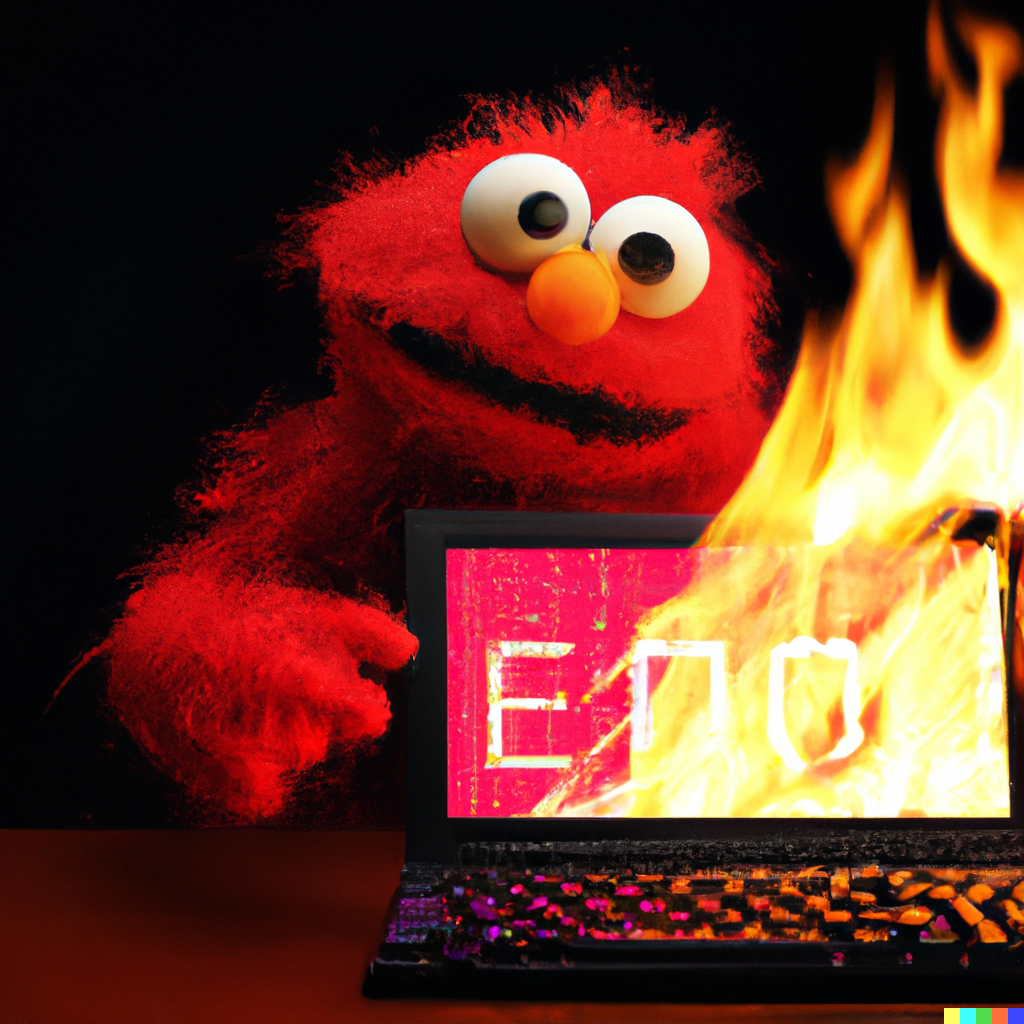 This feels like a good one to end on. In most of the other images (save the hammer, perhaps) Elmo seems like the victim of circumstance. But this Elmo... this Elmo seems eerily calm. He's staring into the camera directly, pointing at the blazing laptop, almost as if to let you know he did this... and he's proud of it.

Note: If you decide to use any of these I'd love "credit" in the form of a link back to this blog post!

Svalbard, marathons and another reminder of how terrible Facebook is