On a podcast I listened to recently the guests mentioned how the Space Jam was still going strong after all these years. They joked about how it must be running on a forgotten server in someone's closet somewhere at Warner Bros. I smiled and pulled up the site for a little 1996 nostalgia and marveled at its existence. Is it really possible this site has sat untouched since I was a freshman in high school?

Out of curiosity I opened the Chrome developer tools and watched the network requests roll in, just to see what resources from a 23 year-old website looked like in modern auditing tools. Immediately I noticed a few things out of sync with mid-nineties web development practices. The page was loading jQuery, Google Analytics and Google Tag Manager.

In case I need to tell you, none of those things existed back then. Google would not be founded for 2 more years. It would be a solid decade before jQuery would appear. Even a close look at the header information showed me something amiss, as the site is clearly running on Amazon S3.

I suppose, just as the Sistine Chapel must be restored from time to time to be preserved for generations to come, so must spacejam.com be upgraded and moved to better infrastructure. Clearly the site has not been running untouched since Michael Jordan came out of his first retirement. Warner Bros has secretly maintained this odd little corner of the web throughout that time.

Out of further curiosity, I can a Lighthouse audit on the site. Space Jam holds up surprisingly well in Google's eyes: 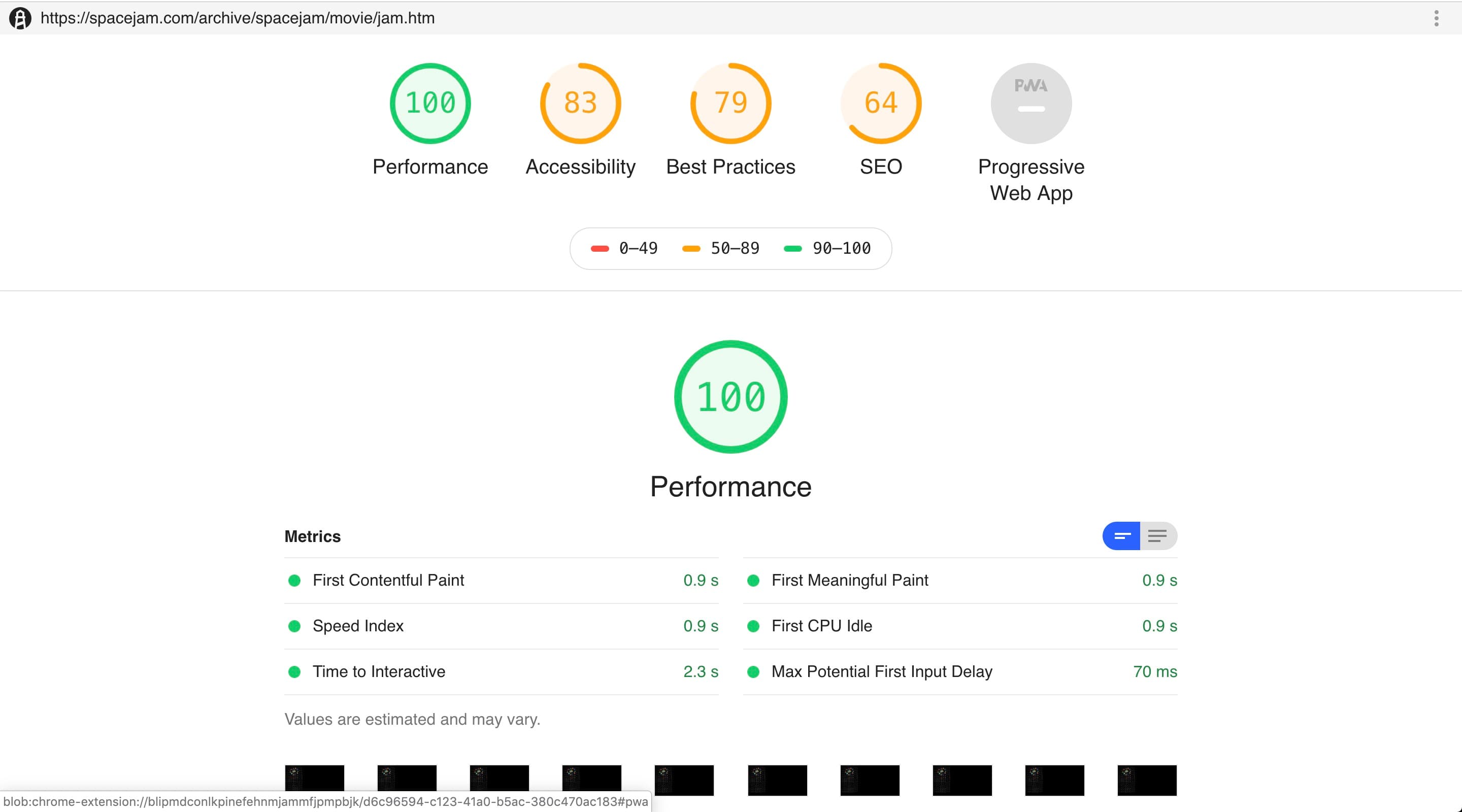 I also analyzed the site using the AXE Accessibility Testing Chrome Extension. It exceeded my expectations, finding only 10 issues:

The most serious usability issues were rated serious by the audit and resulted from a lack of sufficient color contrast for some of the text, which didn't surprise me too much.

Yesterday Dropbox wrote a blog post announcing a new redesign for their product. I haven't tried it yet myself, but the redesign was largely lambasted in the parts of the web I click through. However, I'm more concerned after running a similar audit on their blog post. 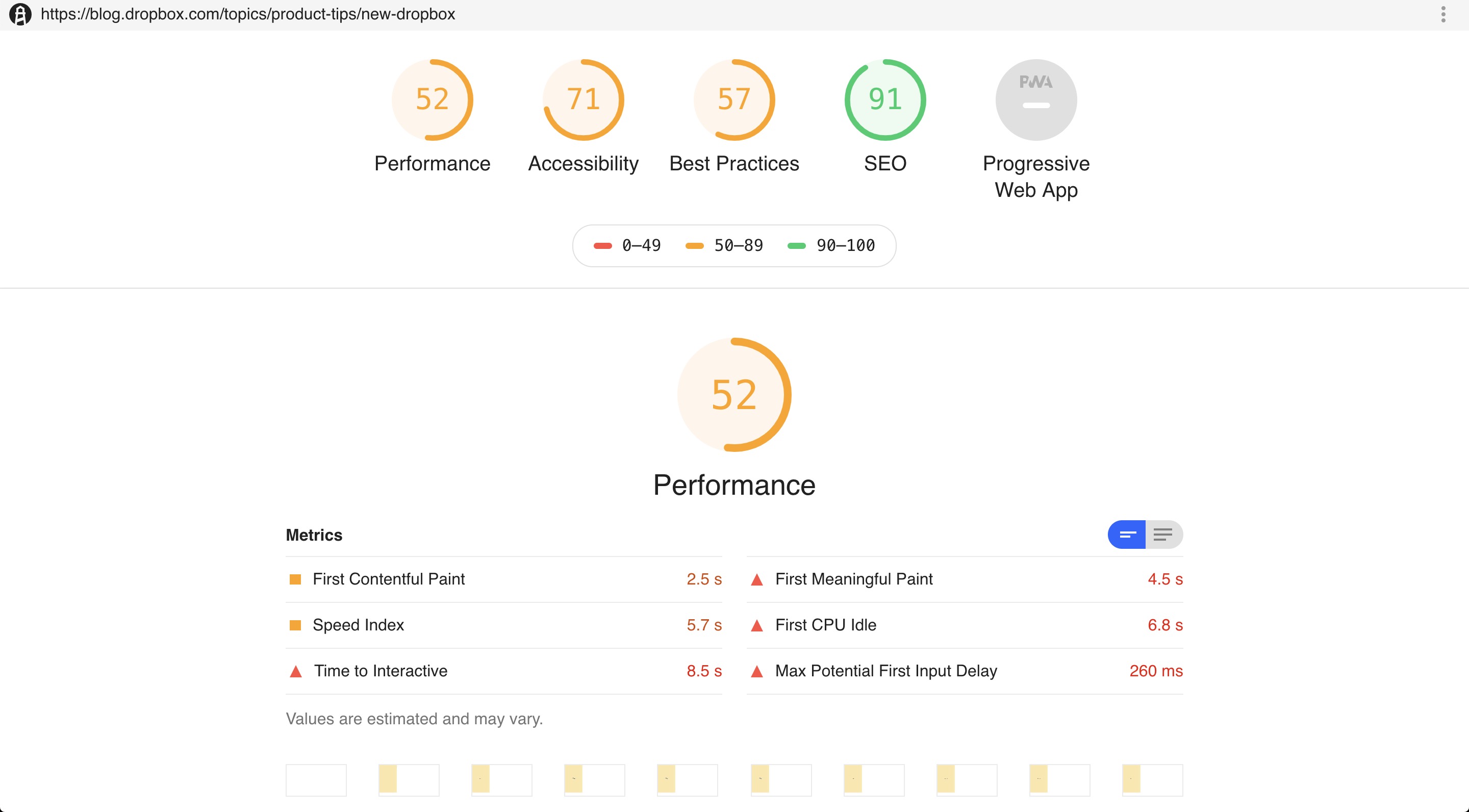 This monstrosity scored 52 in Performance, 71 in Accessibility, 57 in Best Practices and 91 for SEO.

More egregiously, it even seems to be somehow less accessible than a site from 1996 with 31 issues:

A good number of these issues were rated critical by the audit and consisted of much more concerning issues: buttons without text, no alt tags on images, missing form labels and more.

How does this happen?

Honestly, I don't know. My first reaction was, this is what happens when you need to justify your VC money—spend it all on massively over-engineering everything. But that's a bit cynical. Even if it's accurate.

I'm singling out Dropbox because of the timing, but much of the web feels like an over-engineered garbage pile. It is a very brilliant and cleverly engineered pile that many very talented people have banded together to help construct, and I'm not disparaging the many wonderful, talented and bright people that build these things. But making things complex and clever does not make them good or useful to people.

Henceforth, I'm going to start using a new benchmark when I measure the performance and accessibility of a site. I'm going to call it the Space Jam Standard: A movie website from 1996 should not be more accessible than or out-perform a blog post in 2019.

What's the difference between link preload, preconnect and prefetch?


A quick look at the differences between link preload, preconnect and prefetch


A reflection on curious timezones