When you travel, sometimes you meet people. Really, you're practically guaranteed to meet and interact with someone when you traverse the globe 6,500 miles. What's less predictable is how, who and where these meetings occur.

In 2013 I met a Texan names James in the a hotel basement restaurant. It was not a place I was staying or an intentional destination. Par the course that year, I'd taken off for the day with my laptop in-tow, intending to stop and catch-up on my work when the time and opportunity presented itself. On this day that happened to be in a nondescript, hotel basement restaurant in New Kowloon.

I probably ordered a coffee—I can't remember— and sat to work a bit. I'd noticed James when he came in, his being the only other Western face in the vicinity. When he sat down initially I didn't say anything. I was preoccupied with something on my computer, probably catching up on emails from other timezones. After a little bit he motioned to catch my attention. I'd tried to ignore him at first, when we made eye contact, but eventually I acquiesced and looked up.

He laughed. "Damn, you're so quiet! I thought you were Russian. English. Yes!" His Texas drawl was now unmistakable as he turned his chair to face me.

He proceeded to tell stories of disbelief about his ability to get children's books published in China. Somehow his various patents were involved in this as well? I was still trying to process what he might do for a living when he told the story about a man who tried to charge him to visit a golf course he'd previously visited many times before. He responded with a practiced rant about how he would pay when every bootlegged movie and Nike out of China was retroactively paid for. It was a little like listening to Yosemite Sam make his case for instigating a trade ware.

My contributions to the conversation were mostly polite nods and affirmations. Eventaully he asked what I do. "I make websites," I told him, as I tell most people. I cringed a little—saying you make websites is like catnip to certain kinds of serial entrepreneurs. I quickly followed up with letting him know I had to be somewhere soon.

His interest was piqued and he said we should exchange information.

"Here, I'll write it down for you," he said. I offered him a pen and paper as he carefully wrote on the slip I'd torn from my notebook, folded it a couple times and handed it back to me. We exchanged some final pleasantries and I left.

The rest of my day went about as they tended to that year—adrift in an almost dreamlike state, wandering, looking and wondering endlessly at the world around me, stopping when I was hungry, thirsty or needing to catch up on something.

Eventually I made it home for the night and put my things away. I emptied the coins and treasures from my pocket and felt James' piece of paper. "Oh right," I remembered. It had slipped out of my mind the moment I'd slipped it in my pocket.

I wondered, maybe something will come of that? Maybe I'll reach out to him or connect on LinkedIn or something, and somewhere down the line it'll be a connection I'm glad I made. Curious, I opened the paper to see what his contact information was and look him up.

All it said was: James Pickett... Texas.

You won't believe this, but there are a lots of James Pickett's in... Texas. 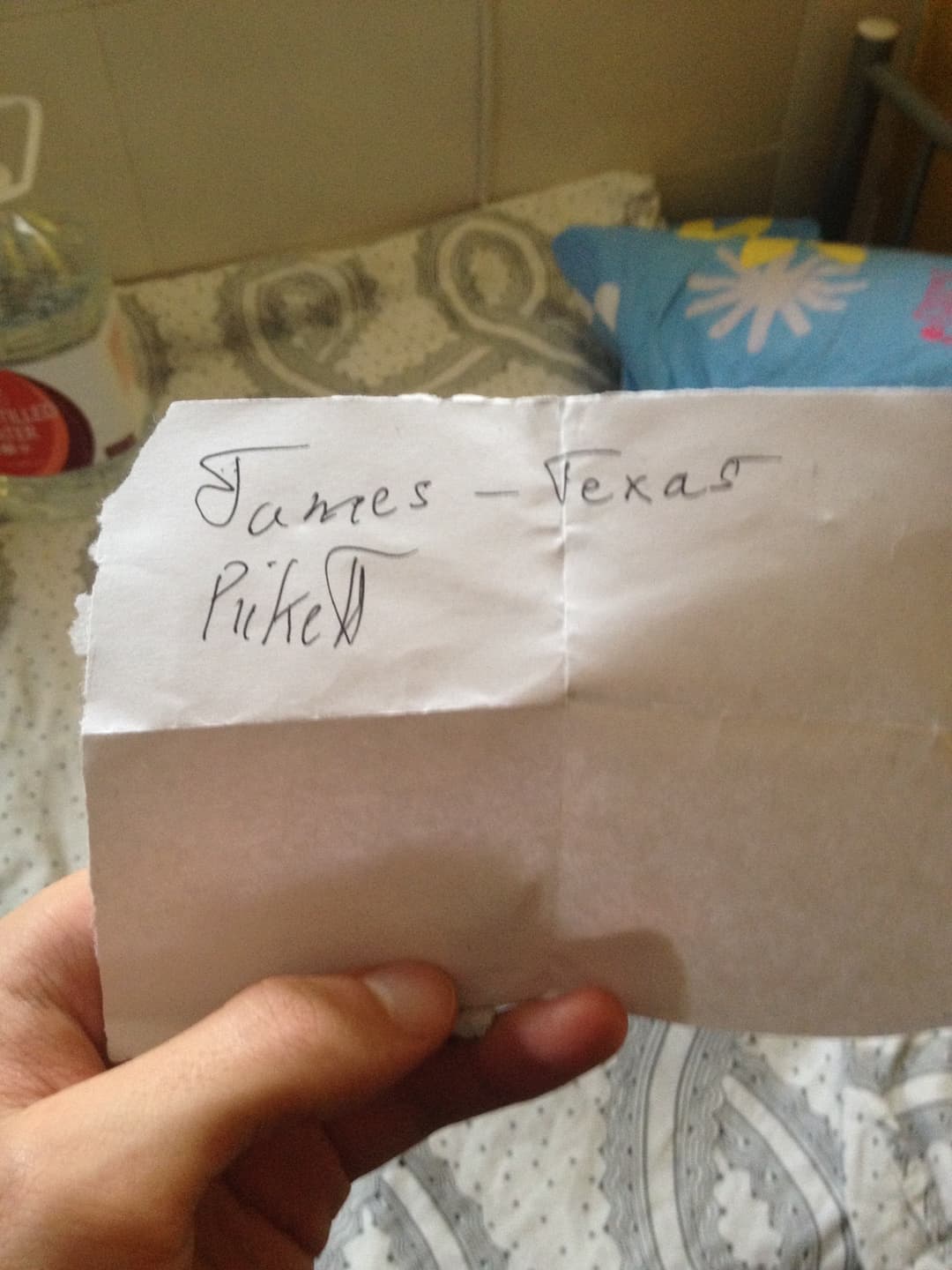