I was going to add another chapter to my ongoing posts about things I've enjoyed during the week today but I realized I'd written the last one less than a week ago and that one of the two things I'd intended to touch on was all the music I'd been playing, but I'd already written about that. There were numerous other things to be thankful for since the last installment but nothing particularly specific or easy to write about at length: getting a lot of work done with lots of new, interesting projects rolling in. A possible trip to Serbia & Croatia in a month or so to meet more relatives (I could probably write about his I realize, and given that I have grand ambitions of slowly turning this blog into something a little more travel-centric that's not a bad idea. Hmm.) and another favorite topic of writing here: yoga.

So instead I'll write about the other thing I did to set the week apart: running. Lots of it. On Saturday I ran about 14 miles up to the Portland Zoo and back from my house — one of my favorite routes.

I did that to partially prepare for the $5 5k race that was happening at Laurelhurst Park on Sunday, but 14 miles kind of overdoing it. When I woke up Sunday I almost decided to sleep through it — like I have for every other $5k 5k that's gone on this year — but it was only four or five blocks away... If ever there was a race for which I had no excuse to miss it was this one. Even on the way there I almost turned around — my legs were sore, my right calf in particular had something that felt like a bruise and had it been just an ordinary running day I would've stayed home to ice and heal.

So I ran just with the intent of finishing and not injuring myself (Frankly this is always my goal, though when I'm feeling good I do like to see if I can push it. The more things I run and participate in the more I'm becoming aware of my times.), which I succeeded at! I felt slow the whole time but nothing felt aggravated or unmanageable.

Afterwards there was a raffle and an award ceremony handing out medals for 1st, 2nd and 3rd by age group. It turns out I was a little less slow than I thought as I came in 3rd (I think overall I might've finished around 10th, maybe a little better) in mine! 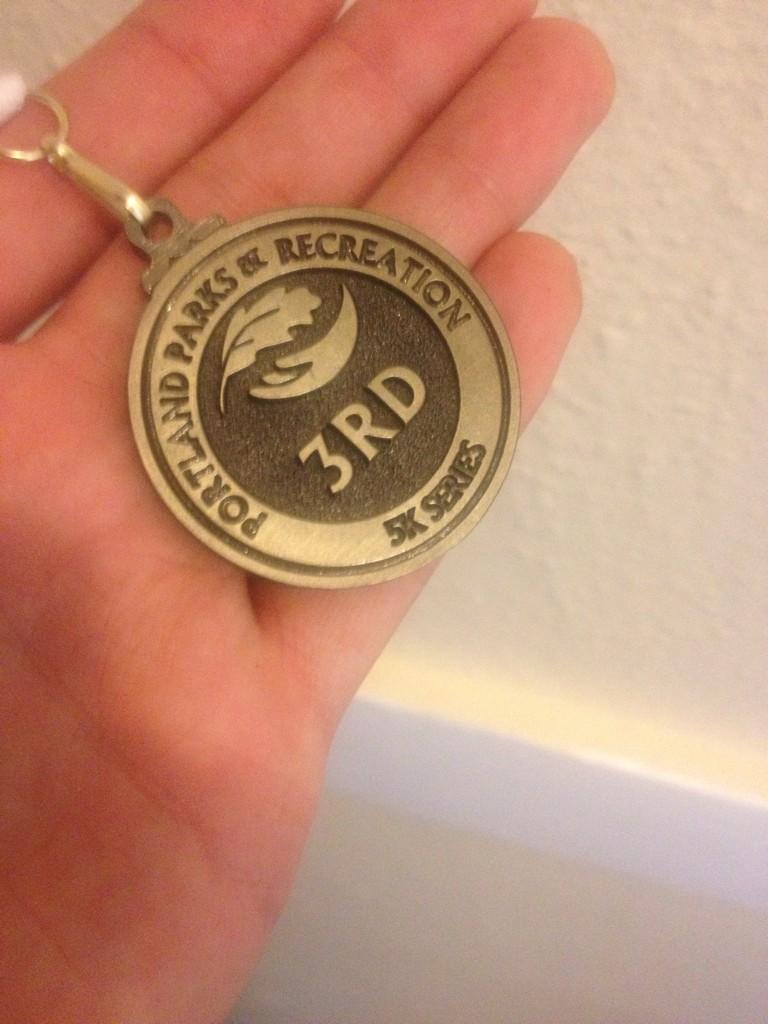 It also helps that I registered as an 83-year old (Jokes. But next time? Next time no jokes.).

I have a small group of running friends I've been participating in some of these things with and we managed to all place in our respective brackets. It would seem my friends are not so slow either, but I already knew that — they're quite admirably fast in fact!

More than anything I'm happy to keep my streak of competing in some sort of sanctioned running event every month alive. Just four more months to go...