From my Twitter stream today. In my head this seemed funny, in only that it took 16+ hours to resolve: 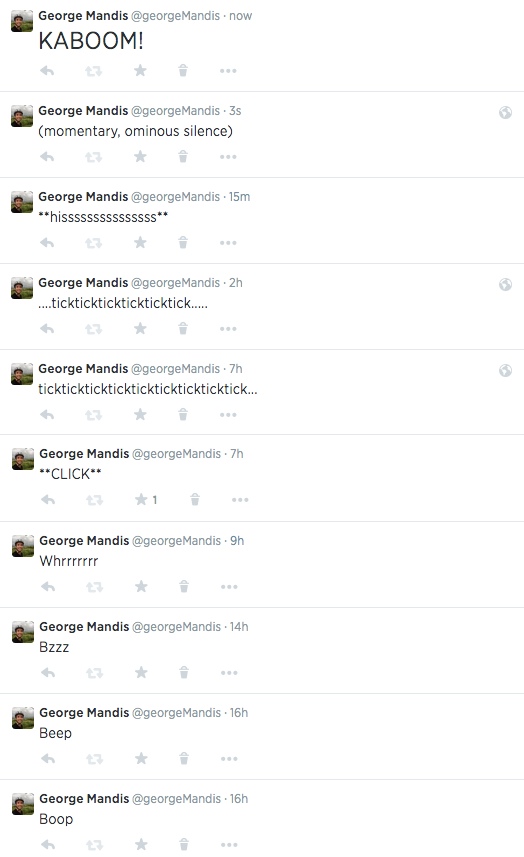 While I'm on the topic of Twitter, I noticed while grabbing these screenshots that they now offer translations for Tweets. Quite cool! Though how it determines a given Tweet's language and the translations themselves are a little suspect:

Okay, so it seems to choke on gibberish. I guess that's fair. And hey — I don't speak Swedish or German so who am I to say?

The Romanian one baffles me completely, but that's probably because I don't even have the vaguest idea of what Romanian sounds like. That's not the only tweet it pegged as Romanian though. Behold, my timely Twitter joke targeting that meaty cross-section of Charlton Heston fans and NBA draft-prospect junkies:

It might not be that funny,  or sensical, but it's also not Romanian. I understand three words might not be enough to make an accurate guess but if that's the case, why guess at all? Then again, when your corpus is seemingly limited to 140 characters that make sense to me that the translations would be rife with errors... actually, that's insane the more I think about it. I wonder if the translation service tries to assess it in the context of all the other Tweets on the stream? If you ignored retweets and the like it seems to me that might get you more accurate results, combined with looking at where the tweeter has set their location to and making some assumptions based on that...  This Twitter translation conundrum actually intrigues me the more I think it through.