This is one of the meta, "blog posts about blogging" that clutter up so much of the internet. I was going to use the word masturbatory, but that's just gross.

I removed the "Share on..." links at the bottom of the posts on this site. When I originally launched this site they weren't included, but I reluctantly brought them in thinking it was something I needed to do. My approach was to make them as subtle as possible, as I hate seeing sites cluttered up with these icons: 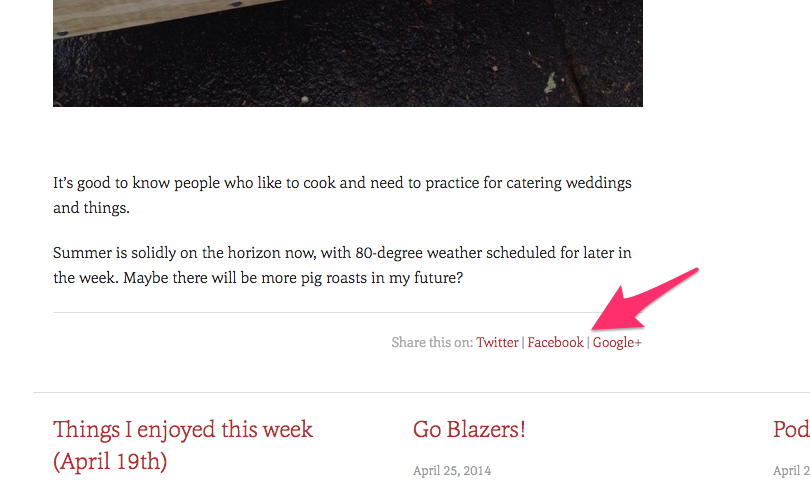 It might be a product of not receiving much traffic, but I don't think they were ever used, and even if they were I kind of question their value. Social sharing links are like big, shiny buttons that strike our dopamine centers with glancing blows, make the counters go up, broadcast our joy and preferences to a crowd that's only giving us half their attention.

So I removed them this morning (I commented them out. Who knows? I may change my mind at some point.).  There is some kind of desperation in sharing asking to be liked and broadcasting it. Any works made available for public consumption are willfully participating, to some degree, in a popularity contest, so I'm reluctant to completely write-off the value of these avenues for sharing things... But I really question their value. Most people won't even finish reading the thing you wrote before sharing them on social media. All I'm really doing when I include those links is providing direct access to an endless echo chamber of people parroting and repeating things like an awful game of telephone  (Side note: I looked up the Wikipedia page to link to for that and had absolutely no idea the game is also known as Chinese Whispers. I... suddenly have many thoughts.).

Most of the blogs and things I enjoy reading provide no such links for sharing — or even the ability to comment, most of the time, which I wholeheartedly endorse (I used to manage a Chrome plugin I made called STFU OregonLive that removed the comments from their articles. If you're asking yourself why then you've probably never spent much time reading articles on OregonLive. It's like an interactive case-study for how not to further discourse regardless of subject.) — and I'm going to go back to emulating that.