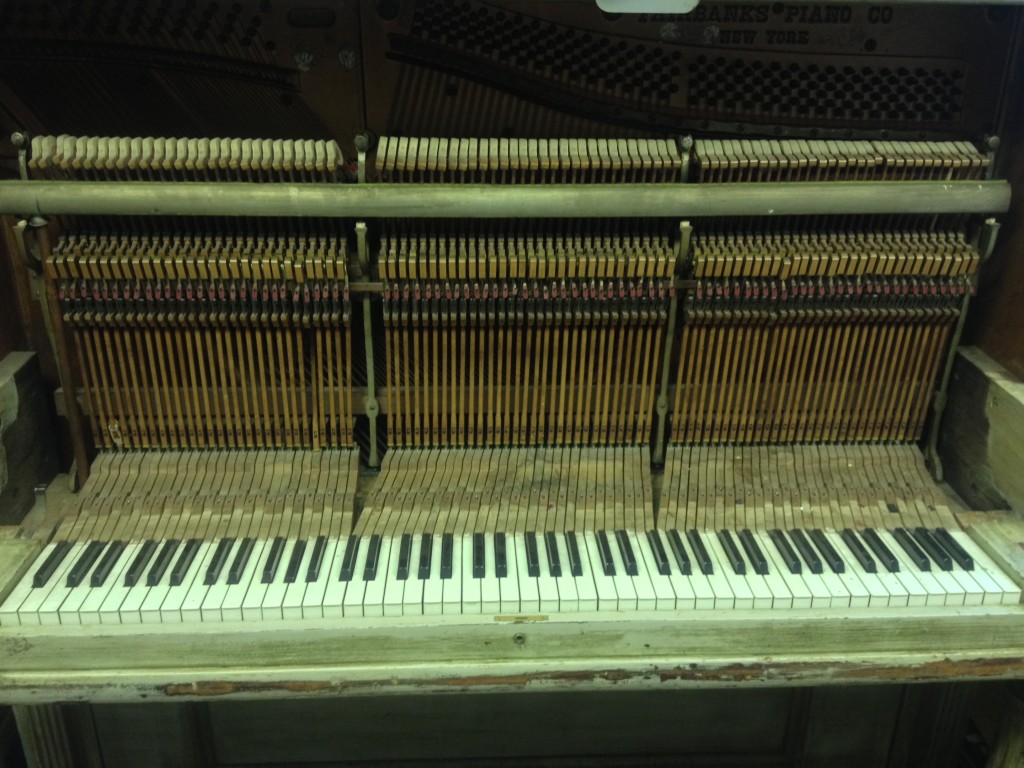 This is a shot of the inside of a piano I obtained on my 17th birthday (I'm realizing now I said it was my 18th birthday on Twitter earlier, but I misremembered). I skipped school that day to go wait in-line at a piano store that was giving away free pianos to the first five people.

It's sat in my parents' garage since then and kept itself in remarkably okay playing condition and tuning given how cold and hot it gets in there and how many pens, guitar picks and beer bottle caps had fallen behind the keys over the years. Next weekend is the annual Laurelhurst garage sale so I decided to take off some pieces and remove as many foreign objects from it as I could. Alas, no ancient treasures or long-lost artifacts from my youth. It was more like a time capsule full of... garbage. Maybe we already have a word for that? Am I thinking of a dump? I think I am.

And now, today, my 32nd birthday has arrived.  This piano has been around close to half my life. How on earth did that happen? It's a little sad to be setting it free —and possibly even wishful thinking. I have this sneaking suspicion it will be hard to even give away — but it simultaneously feels good to not cling too tightly to things. Last year I spent the entirety of the year traveling internationally, averaging a new country every 3.5 weeks and living out of a single bag. It's made me think about belongings and things a bit differently. I've come to realize there is really not so much I need and even less we can take with us through life.

So if the piano goes, I'll be happy and press on with one less thing swirling around my life. And if the piano doesn't budge... Maybe I'll take it with me to a house someday, or complete the daydream I've long had about converting it into a desk.  I don't know.

I think 32 will be a good year. It's a nice number; divisible by many others, enjoyable in its reverse ordinality, a number that makes me think of fractions and 32nd-notes — a fitting thing to think about with pianos on the brain. It's the same age my father was when he had me, which is curious to think about. It's an age where nature has started to show signs of nudging us towards the door exiting the gene pool, but it's a gentle nudge. A wrinkle, a gray hair, aches in knees but still existing in a body that can take off for a 17-mile jaunt from time to time. Life is not so bad.

A year ago I was in Portugal writing about jars of peanut butter — my favorite homesick snack when I could find it last year and, as it turns out, my favorite snack while at home — and preparing for my forthcoming trajectory that would take me through several continents and a number of adventures (known and unknown) before returning home. Today I'm in Portland, talking about long-distance runs and giving away pianos with less certainty about my future trajectory. And I think that's okay.